Hi guys, please welcome Tamsin to my blog today with her new release from Evernight! 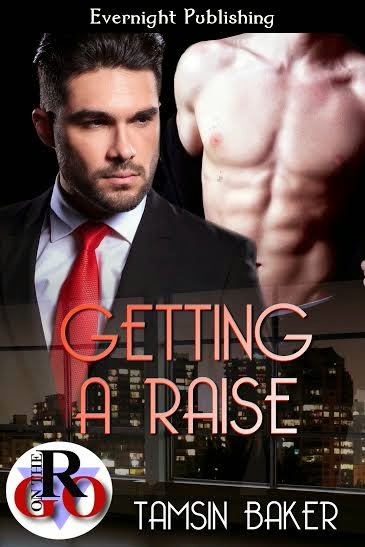 Nick is the most beautiful, successful, amazing man—just ask his executive assistant Tayte.
Tayte’s been in love with his boss from the moment he set eyes on him. But two years working with him and Tayte isn’t even sure Nick is gay.
But it’s time for his contract evaluation and Nick wants to give Tayte more than just a raise.

It took Tayte ten minutes to walk to his car, then another fifteen to drive to Nick’s place and find a place to park.
When he stepped up to the intercom on the outside of the expensive apartment block his heart was pounding a hundred mile a minute.
He pressed the apartment number and waited, thrusting his hands into his suit pant pockets.
“Come on up.” Nick’s voice came through the speaker and a loud buzzing ensued.
Tayte grabbed at the door handle and pulled hard, not wanting to look ridiculous by asking Nick to do it again.
He rode the lift up, his belly unsettled and excited. He shouldn’t be nervous. They’d already had sex. What else was going to happen?
He walked up to apartment twenty-seven. How many times had he thought about this moment? He’d made up a hundred excuses in his head, scenarios where he’d end up at Nick’s apartment at ten o’clock at night and they’d make out, or something.
He laughed as he knocked on the door and hung his head in shame. When did reality ever beat a fantasy?
“Never.” He muttered beneath his breath just before the door swung open.
“I’m just cooking a steak. You want one?”
Nick was topless, in jeans, and holding a pair of tongs.
“I love you.”
Did I just say that? Oh fuck!
Nick just laughed and waved him in. “I’ll take that as a yes.”
Tayte wandered in, half transfixed by the sight of Nick’s gorgeous arse moving in his blue denim and the other half salivating over the smell of cooking steaks.
He walked down a hallway and stepped into a massive open plan living space.
“Wow,” Tayte said as he walked toward the floor to ceiling windows showing off a magnificent view of the city. “What a view.”
“Yeah, thanks. It was the main reason I bought this apartment. Some of the other ones were bigger, but the view sold me on this place.”
Tayte nodded and continued to stare. Wow. On a clear morning you’d be able to see all the way to the docklands.
“Medium rare okay for you?” Nick asked and Tayte turned around to face his chef for the evening. His belly rumbled in response and he rubbed over the loud sound.
“Yes please.”
Nick had set the glass table for two and set two plates down, each with a steak, a handful of green beans, and some garlic bread.
“You want anything else?” Nick asked as he unscrewed the top on a bottle of red wine and poured a couple of glasses. “Unless you want a beer instead?”
Tayte shook his head and swallowed hard.
“No, that’s great.”
They sat down opposite each other and picked up their wine glasses.
“Cheers and welcome,” Nick said with a relaxed smile, inclining his glass toward Tayte’s.
“Oh, yeah. Thanks.” Tayte moved his glass forward clumsily and the crystal clanged with a ricocheting racket.
“Fuck. Sorry.” Tayte grabbed onto his wine goblet to still the noise and gulped down some of the peppery red. He was seriously stuffing this up.
“No stress.” Nick smiled again before he too drank some of his wine. “Dig in.”
Tayte stared down at his eye fillet and picked up his utensils. How much more of a spazz could he be? He cut into his steak, red juices oozing from the center.
“It’s probably closer to rare, than medium,” Nick said as Tayte put a piece in his mouth and groaned as paradise exploded across his tongue.
“Good?” Nick asked, expectation and pleasure already present in his blue eyes.
“Hmmm, mmmm,” Tayte responded, swallowing then continuing to devour the eye fillet that was cooked to perfection. “Wow.” He sighed when he’d finished, reaching for the accompanying carbohydrate and inhaling the fumes. He loved garlic bread, especially one slathered in butter.
“You got plans for the weekend?” Nick asked.
The boss was making small talk! Now that was a first