Just in time for Christmas!

Perfect for the season, I wanted to share "Bought for Christmas" by Doris O'Connor and published by Evernight Publishing. Thanks so much for having me on your blog today with my Christmas Story, Bought for Christmas.  ☺
Emilia Duncan is in sore need of a miracle this Christmas, never more so then when she finds out that she has been sold to The Beast to save her father’s company.
Not honouring the contract is out of the question. Besides, she has been lusting after Hunter Monahan for as long as she can remember. Her father’s former friend has starred in every one of her erotic dreams, since she was old enough to have them.
A weekend of debauchery is what she signs up for… She doesn’t count on falling in love with the man behind the scars. This man she cannot resist, and as secrets spill and emotional walls come tumbling, maybe she will get that miracle she needs.
It is Christmas, after all… 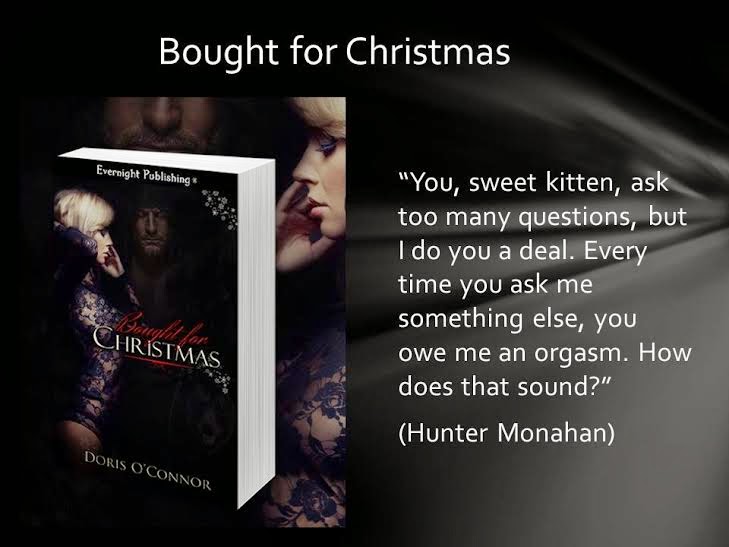 Blurb:
~Editors Pick~
I’m the beast, haven’t you heard….Christmas is supposed to be a time for miracles and one will surely be needed when Emilia Duncan finds herself sold to the beast to save her father’s company. Having lusted after the much older, enigmatic man for as long as she can remember, spending the Christmas weekend as his submissive will satisfy her raging libido, but can she protect her heart?Bear Shifter Hunter Monahan cannot stand idly by when Emilia is thrown to the wolves. There is only one shifter who will get his claws into her and that’s him. The contract ensures her submission for the weekend. Too bad his bear wants much more than that. Hunter is used to hiding behind his gruesome scars, but in the bid for Emilia’s heart, that is not an option this time.  Isolated in his cabin, it’s not just the snow that melts.


Buy Links: http://www.evernightpublishing.com/
All other buy links can be found here:


Add it on Goodreads: https://www.goodreads.com/book/show/23609529-bought-for-christmas


Glutton for punishment would be a good description for Doris... at least that's what she hears on an almost daily basis when people find out that she has a brood of nine children, ranging from adult to toddler and lives happily in a far too small house, cluttered with children, pets, dust bunnies, and one very understanding and supportive husband. Domestic goddess she is not.
There is always something better to do after all, like working on the latest manuscript and trying not to scare the locals even more than usual by talking out loud to the voices in her head. Her characters tend to be pretty insistent to get their stories told, and you will find Doris burning the midnight oil on a regular basis. Only time to get any peace and quiet and besides, sleep is for wimps.
She likes to spin sensual, sassy, and sexy tales involving alpha heroes to die for, and heroines who give as good as they get. From contemporary to paranormal, BDSM to F/F, and Ménage, haunting love stories are guaranteed.
Stalking Links
Website Blog Twitter  Facebook Pinterest  Evernight Publishing
Amazon All Romance E-Books BookStrand Barnes&Noble