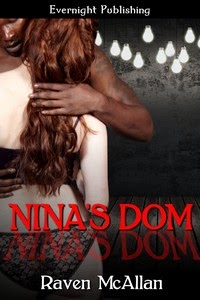 It's funny how my characters tell me very firmly who they are, what they are and insist I write just that. No trying to change them. It just won't work.
By trial and error, I've now accepted that.
Nina and Dominic were no exception. In fact I wondered at times if they would ever get together, they were so blooming stubborn.
However they had fun trying to show each other whom they were and want they wanted.
I just wrote what they told me to—as you do.
This is the result.

Nina Mack is no sub. So why then do all her senses scream at her to submit to the enigmatic Dominic Christopher?
When the two meet at her friend's hen party at Dommissimma, sparks fly. Their attraction is immediate and explosive, but how can Nina ever allow herself to enter into a relationship with a Dom?
Dominic has lost interest in BDSM since the death of his wife, so the insistent tug of awareness toward the volatile and decidedly bratty Nina is a welcome surprise.
With his inner Dom firmly awakened can he convince Nina to give their relationship a try?
Time will tell if these two can find their own Dom/sub relationship and reclaim happiness.

"Shall we start again, or do you want me to take you to your friends?" As he spoke the words, Nic hoped like hell she'd stay. Even if all they did was talk. Somehow he had to explain why to all intents and purposes he'd left the lifestyle, as well as discover the reason she was adamant she wasn't interested. She sent out so many conflicting signals. Certainly no Domme, but neither only a sub. Was she a switch? He hadn't seen any sign of that either. She actually seemed what she said. Uninterested. The solid lump of disappointment in his gut hit him hard. He waited, until finally she spoke.
"Let's talk."
The relief kicked the lead lump away in a flash. Nic wouldn't have been surprised if his hands trembled. He resisted the urge to sit on them.
"Then, hi there." Nic held his hand out, and he was more than happy to see it didn't shake. "My name is Dominic Christopher. Nic to my friends, among whom I hope you will soon be counted. Born in Barbados, moved to Scotland to go to university and stayed. I'm forty- two, clean, healthy, and financially stable." Why did I add that? I sound right up myself. "Until my wife passed away I was her Dom and her Master. She was my slave. We lived the lifestyle 24/7. Since then I've had no interest. I've continued to help out here, usually on the door, or as dungeon master. I do tutorials to keep my hand in, but never in wax play and Shibari." Until now. "Those were for Lue and me and I'm not playing anywhere else in that way. I only want to demonstrate, not shall we say, participate."
"But not wax or Shibari." It wasn't a question, and to Nic's relief Nina didn't question his decision.
"Exactly. I've had no interest in rejoining the lifestyle to any degree until tonight. Don't ask me why. I just took one look at you and thought, 'mine', preferably Shibari tied and covered in decorations of wax. Total, three hundred and sixty degree turnaround. Presumptuous, scary, exciting, and as likely as not I'm going to crash and burn. But I'm alive again."
"Probably nothing to do with me, it's just the right time," Nina said. Then she reddened again.
He loved the way her emotions showed in the color of her skin.
She gasped and shook her head. "Oh blimey, that's so rude. Sorry, it wasn't meant to be. I'm a bit out of this introducing myself lark."
Does she think I'm not? Yet again, Nic found himself in the position of wanting to show her the errors of her ways. To have her at his feet, head bowed, and submitting. He was uneasily aware that he thought there was about as much chance as a snowball in hell of that happening.
"As I am," he said. "Nevertheless I managed." "Yes, er well, there's no need to be arsy. I'm doing my best.
Hello, I'm Nina Mack. I'm twenty-eight. Single, a teacher, and not interested in anything to do with BDSM. I came tonight because a friend who's a relative of Linsey set it up. That's it really."
Somehow, Nic thought there was more to it than that. He waited, until she fidgeted under his gaze and continued.
"Oh yes, I'm clean and solvent. I love walking, skiing, and snowboarding and riding my bike. But I also need my dose of smoke as my mum puts it. That means I love living in the city, not drawing on a dog end, but I get out into the countryside at least once a week."
"Dog end?"
"Fag end, ciggy, smoke, whatever you'd call it." "Thank you." How he'd like to discipline that attitude out of her. She thought he was arsy? She took arsy-ness to a whole new level.
"Can I ask why?" Nic asked. He was proud of his level-toned response.
"Why what?"
The level tone vanished like snow in a volcano. "Hell, Nina, you're more prickly than a porcupine. I wondered why you live in town when you seem so much a country girl. Yes, I want to know how you know you’ve no interest in kink. Of course I do. And not only that, if you give me the opportunity, I'll do my damnedest to show you that you think wrongly. But give me a break here. Either meet me halfway, and mean it, or there's no point in carrying on." He stood up and opened the door. "You seem to have awakened my Dom, and if you don't want him, perhaps I should find one of your friends who does?" It was a gamble, but Nic hoped he hadn't mistaken the interested look in her eyes on more than one brief—albeit very brief—occasion.
Nina bit her lip. Twiddled the end of her hair, tucked it behind her ear, and pulled it over her cheek again. She turned her watch around on her wrist and checked the time, and gave a half shrug.
"I'll try."
"That's all I ask." Nic closed the door again and returned to the seat beside her. "How about I tell you what I'd like and why? And then you tell me why you're not prepared to entertain the idea. Or maybe that you are prepared to try?"
"That sounds good. Sort of you show me yours and I'll show you mine?" Nina opened her eyes wide and then crossed them, before she giggled. "Over to you."
So if I've intrigued you enough to want to indulge… 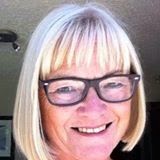 Well what can I say?

I'm growing old disgracefully and loving it.
Dh and I live on the edge of a Scottish forest, and rattle around in a house much too big for us.
Our kids have grown up and flown the nest, but roll back up when they want to take a deep breath and smell the daisies so to speak.
I write in my study, which overlooks the garden and the lane. I'm often seen procrastinating, by checking out the wild life, looking—only looking—at the ironing basket and assuring tourists that indeed, I'm not the bed and breakfast. That would mean cooking fried eggs without breaking the yolks, and disturbing the dust bunnies as they procreate under the beds. Not to be thought of.
Being able to do what I love, and knowing people get pleasure from my writing is fantastic. Long may it last.