Hi guys, please welcome Naomi Clark to my blog today, with her new release "Phantom Fears" - it was just released today from Evernight and it's a Free Read, so be sure to stop by and get your copy! 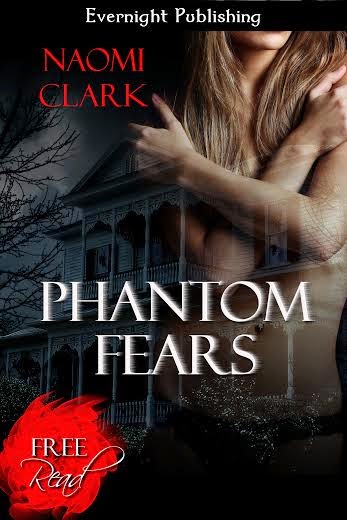 As a private investigator with a werewolf girlfriend, Shannon Ryan is used to the unusual. But her latest case has even level-headed Shannon questioning reality. Joyce Bonner swears her daughter is being haunted by a poltergeist. Charlotte Bonner swears she's not. Shannon has one night to uncover the facts behind the supposed supernatural phenomena. Between an over-enthusiastic ghost-hunter and her own skepticism, can she get to the truth?

Charlotte moaned again, mumbling something incoherent and probably rude. She sat up slowly, as if she was moving through tar. “Whassup? S’not time for school.”
“There was a power cut,” I said in explanation. “We just wanted to make sure you were alright.”
“I’m fine,” she said irritably. “Just wanna sleep.”
Esther fussed around her like a mother hen, fiddling with the duvet and muttering about hormones. I was about to tell the au pair to leave Charlotte be when the screaming started.
I’m not ashamed to admit, I jumped. Esther did too, clutching at the bedpost for support. Charlotte just groaned “What the fuck?” and buried herself under her duvet. I wished I felt so apathetic. It was a woman’s scream, shrill and eerie, and once again I was plunged back into the shadows of Paris. I didn’t want Ayla’s night vision or sense of smell anymore; I just wanted Ayla.
I sucked in a deep breath and reminded myself forcefully that there was no such thing as ghosts. “We should go find out what that is,” I said, impressed at how calm I sounded. Esther gripped my hand as we left Charlotte’s bedroom and I squeezed her fingers as I would Ayla’s, missing the warmth and reassurance of Ayla’s firm grip.
Taiki was running down the hall when we came out, a torch in hand. “How amazing is this? Actual manifestation! I can’t wait to see the data!”
I snatched the torch from him since he was waving it around like a lunatic. The beam wasn’t very bright, but I felt better with a light in my hand. The sound of clanking blended in with the screams now, like some old brass machine full of rusty gears. I gritted my teeth, hating the sound. “Where’s Joyce?” I asked Taiki.
“In the kitchen. Where’s Charlotte?”
“In her room, trying to sleep through this racket.” I shone the torch around the hall, not sure what I expected to see. My chest was tight with adrenaline, but the longer I stood here listening to the awful noise, the less nervous I felt. Noise was all it was. No slime dripping down the walls, no apparitions or flying objects. It was surprisingly anti-climactic and I just wanted it to stop. That meant finding out where it came from.
Without waiting for the others, I ran down to the kitchen, calling Joyce’s name. She sat at the kitchen table, head in her hands. I touched her shoulder lightly and she jumped, slapping my hand away.
“Shannon! Oh goodness, I’m sorry. I just…my nerves…I can’t take much more of this.”
“Then let’s stop it,” I said. The noise wasn’t as loud down here, although I still had to raise my voice to be heard. “Let’s get the lights back on, okay? Where’s the circuit board?”
“In the basement.”
Of course it was. What horror film scenario was complete without a trip to the basement in the dark? “Right, show me the way then.”

My first love as a writer is urban fantasy, quickly followed by werewolf myth and legend. The Urban Wolf series lets me combine the two and put my own spin on them – what more could a girl want? When I'm not writing, I'm probably creating my own perfumes, reading, watching wacky documentaries and/or drinking fancy tea.