Welcome Author Casey Moss to my blog to talk about her new release at Evernight Publishing! 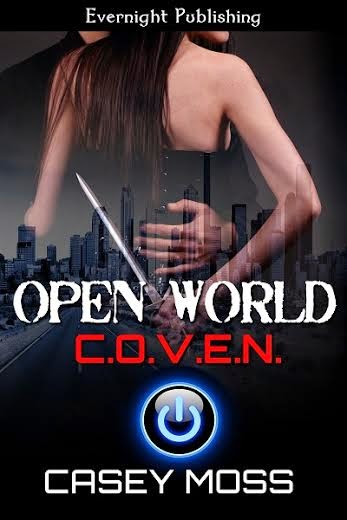 The world of C.O.V.E.N. (Clans of Vegas – Endless Night) first appeared in Evernight Publishing’s anthology Keyboards & Kink (available here: http://www.evernightpublishing.com/keyboards-and-kink/ & at other fine e-tailers) in Casey’s story, AFK.
In AFK, we saw a peek into I-D-8 Entertainment’s in-production MMORPG: Clans of Vegas – Endless Night, also known as C.O.V.E.N. when Beth and another gamer got sucked into the game for real.
Now, when it comes to Open World, it’s actually made up of parts from two novellas that had been previously published. Those stories were my very first published ones released in 2008 under my alter ego’s name. A few years ago, I received the rights back on them, and they sat in a file until this year. There’s been some major work done to revamp them from a sci-fi’ish plot to the computer gaming one present in the book today. I am so excited these stories, and more to come in the C.O.V.E.N. world, have found new life and a great new home with Evernight Publishing.

In the story, Open World, some of the employees of I-D-8 have joined together for a LAN party to test the game. For definitions on the computer gaming term: open world, check out http://www.techopedia.com/definition/3952/sandbox-gaming).
Here’s a look into the story…
~ Blurb ~
The world has broken out in wars. Las Vegas has been ravaged by chemical warfare and is now home to several clans and creatures.
Welcome to I-D-8 Entertainment’s newest game: Clans of Vegas—Endless Night.
Friends and family have gathered for a crunch time playtest of C.O.V.E.N.. When a horrible thunderstorm hits, everyone’s sucked into the game for real. In the MMORPG, Hope Collins is kidnapped by Buzz and forced to submit to his whims. Her boyfriend, Alden, has to delay his quest of defeating a clan’s prince to save her, but time and circumstance don’t seem to be on his side. Faith Collins is bombarded by strange dreams brought on by Buzz. Her boyfriend, Tavis, learns to dream walk, but can he help break the spell she’s under and save her before she’s lost to him?
C.O.V.E.N. is more than just a game. It’s a whole other world.

~ Excerpt ~
Why the hell is that man buddying up to Hope’s dad and trying to charm her? Why is he even here? He’s a bean counter, not one of the game developers, not one of the I-D-8 family.
Kids on the red seat swings and yellow slide of the play set shouted at each other, jarring him out of his thoughts. He tossed a cursory glance their way, then looked back at the other family he one day wanted to be a part of. Faith, Hope’s fraternal twin, joined them at the table. There was a cousin, too—Cassandra, one of I-D-8’s story writers—who happened to be missing at the moment from the gathering.
Once more the air shimmered around him. This time a mirage-like heat disturbance gave everything in his line of sight a watery luster. Something weird was going on. He wished he could pinpoint what, since he reacted to it as if he were on a boat—slightly unbalanced and disorientated. He hated feeling that way.
Den returned to the meat on the grill. He couldn’t chance having anyone seeing his face and the concern that might have slipped through on it. He loved puzzles and solved them all no matter their difficulty, so he really disliked not being able to figure out a solution to the day’s bizarreness.
I can’t let them see me sweat. If any of them catch wind that I’m not the laid back dude I’ve presented myself as, then everything I’ve worked for will be over. I can’t have that.
Replaying the events of the past few minutes in his head, he dissected them bit by bit in an attempt to find anything. Just one smidgen of information could give him a clue as to the abnormal sensations he’d been experiencing. A cool breeze brushed his skin, sending goose bumps to dance with the hairs on his arm. He closed his eyes and let his thoughts glide where they wanted. The task of sorting the details sent him into a calm, meditative state. Through the process he used to mull over difficult enigmas, he hoped the answer would reveal itself.
As if on automatic pilot, he breathed deep of the mesquite scent wafting from the wood chips amongst the coals and slowed his heart of its frantic pace. Concentrate, he told himself.
Emotions and reactions in check, he willed a protective aura shield around himself.
Pick up on the man’s thoughts. Sense his purpose.
In his opinion, information only needed to go one way…from the prince to him. He couldn’t afford to have the fellow figure out who he was.
Not yet at least. It’s way too soon.

~ Bio ~
Casey Moss delves into the darker aspects of life in her writing, sometimes basing the stories on reality, sometimes on myth. No matter the path, her stories will take you on a journey from the light-hearted paranormal to dark things unspeakable. What waits around the corner? Come explore… 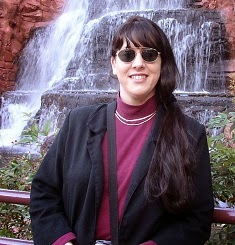 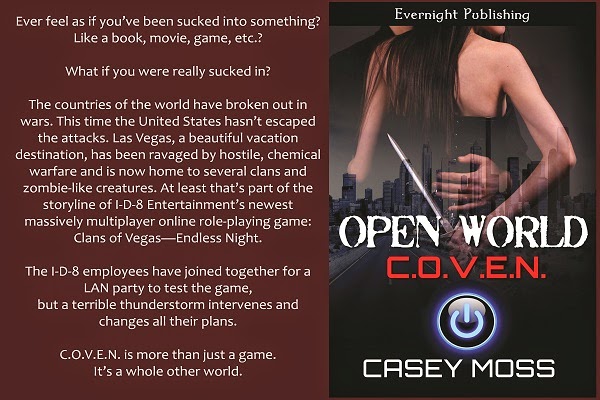