Today I have Doris O'Connor visiting my blog to talk about her new release... take it away, Doris! 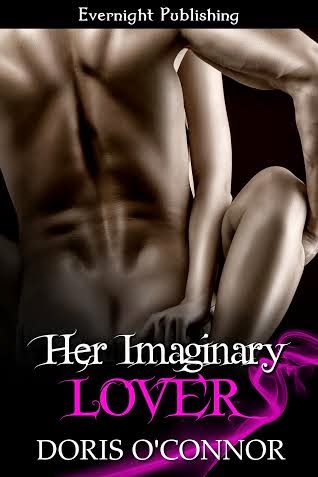 Thanks so much for having me here today with my paranormal BDSM story Her Imaginary Lover.
Did you have an imaginary friend as a child? I bet he felt very real to you. What if these imaginary friends were real, however? And what if, not all of them were nice friends… What if there was a whole other dimension…
Such is the premise behind Her Imaginary Lover.
To Macie, Kaylom has always been real. Blind from birth, she never realized other people couldn't see him, until her parents started to doubt her sanity, and eventually she sent him away.
That was fifteen years ago, but Kaylom is back now, and Macie is not a child anymore…

Blurb:
~Editors Pick~
When your imaginary friend turns out to be real, there's only one thing you can do—have the best sex of your life.
Macie Johann's ordered world is thrown into chaos, when she is attacked on her way home from work. The muscle bound hunk that comes to her rescue would appear to be naked? Okay then, maybe she has hit her head a bit too hard, but then again no one else seems to notice him, and there is something very familiar about this guy.
Blind from birth Macie has learnt to trust her senses, and they all scream at her to grab her chance of true happiness with the man, who makes her body and soul sing. Never mind the small fact of his not being human.
When their actions get Kaylom yanked back into his dimension to stand trial, Macie follows determined to fight for her man.

Excerpt:
Macie grinned at the sound of smashing crockery, as he kicked her legs apart and urged her forward until her torso lay prone on her table. With her breasts squashed into the wood, and his hand applying pressure on her shoulder blades, she had nowhere to go. A shudder went through her when he stepped so close that his hair roughened thighs touched the back of her legs. His heavy erection slid along her pussy lips, and she knew she was coating him in her juices. They slid down the inside of her thighs.
The mere fact they were doing this here, now, in her kitchen added another layer of deliciously naughty to the whole experience. Her kitchen faced a busy main street, and she had no curtains up. In theory anyone would be able to see in and see what they were doing. A giggle escaped her at the thought. Not that they would see Kaylom. They would no doubt wonder at the strange woman who lay naked along her table.
Kaylom's chest molded itself along her back, and a little nip to her shoulder focused his attention back on him.
"What's so funny?" he asked.
"Nothing."
A sharp pinch to the side of her breast made her gasp. That sting traveled straight to her clit, and she wriggled her hips to relieve the resulting ache in her pussy.
"Nothing, is it? I think my little munchkin needs to be reminded who's boss."
He lifted off her, and she moaned at the loss of his body warmth. A smack to her ass ground her pelvis into the edge of the table, and she bit her lip to stop from crying out. That felt way too good. He soothed the sting with his hand, and then spanked her other cheek with considerably more force than the first swat. Macie yelped and squirmed under his hands, and his chuckle seemed to echo around the room. It only served to stoke her excitement further. Kaylom ran his hands up and down her spine and then up her arms taking them with him. He curled her fingers over the opposite edge of her small table.
"Keep them like this and don't move, or I'll have to tie you to this table, do you hear me?"
"Yes," she said, and all the breath left her lungs when he smacked her ass with so much force she slid further up the table.
"Yes, what?" he asked, and this time there was no mistaking the edge of command in his voice. He yanked her head back hard, and his hot breath skittered across her sweat slicked flesh as he nipped at her lips and throat. A feminist would have a field day with her right now, but fuck her, if this display of his dominance didn't turn her on even more.
What had he said? His kind demanded their mates to be submissive and calling him “Sir” was a token of respect.
"Yes, Sir," she said, and he kissed her with so much passion, it took her breath away.
"Good girl. You have no idea how much it means to me to hear you say that."
She blinked back tears and held onto the edge for dear life when he grasped her hips, and pulled her down the table until her ass hung off it.
"You're so fucking wet for me baby. You want me to fuck this sweet ass of yours, don't you?" His breath felt cool across her slick folds, and his fingers dug into her thighs as he spread her wider, and Macie lost the ability to think at the first touch of his tongue.
He licked her from slit to clit and back again, until she was so close to coming she didn’t even know what the sounds were spilling from her mouth.
Seconds before she reached that all elusive peak, he withdrew, and she thumped her head against the table in frustration.
"Bastard, err, Sir."
He laughed and then rained a series of hard swats on her ass that left her breathless and even wetter.
"Oh your butt reddens beautifully under my hands, my sweet, and let's gets one thing straight. I will not tolerate you using cuss words. Your mouth is far too pretty for anything that nasty to come out of it. If we were in my realm I'd shove a gag inside that foul sounding mouth and then strap a vibrator inside you with just enough force to keep you on the edge without coming. How would you like that?"
Macie shook her head and swallowed nervously.
"No, Sir, thank you, Sir, I wouldn't like that at all."
The air displacement gave her a second's warning before he tunneled his tongue into her pussy hole, and she climbed back up those delicious rungs of tingling bliss before he once again withdrew.
Macie keened her disappointment, and he delivered several more open handed swats to her ass, before he attacked her swollen and sensitive pussy again.
Macie lost count how many times he spanked her and then revved her up again before withdrawing. Time lost all meaning. All that mattered were the painful swats to her ass that morphed into blissful heat, which suffused her entire body until she felt on fire for this man.
From far, far away she heard his voice eventually, and she flinched when something cold hit her ass crack.
"Sorry, my sweet, this will only last a moment." 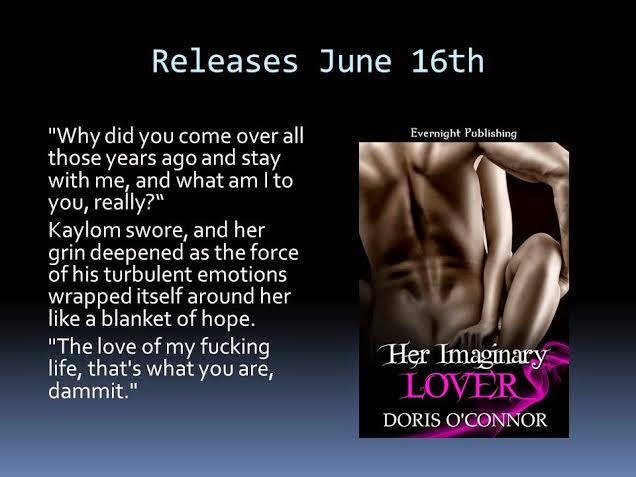 Author Bio:
Glutton for punishment would be a good description for Doris... at least that's what she hears on an almost daily basis when people find out that she has a brood of nine children, ranging from adult to toddler and lives happily in a far too small house, cluttered with children, pets, dust bunnies, and one very understanding and supportive husband. Domestic goddess she is not.
There is always something better to do after all, like working on the latest manuscript and trying not to scare the locals even more than usual by talking out loud to the voices in her head. Her characters tend to be pretty insistent to get their stories told, and you will find Doris burning the midnight oil on a regular basis. Only time to get any peace and quiet and besides, sleep is for wimps.
She likes to spin sensual, sassy, and sexy tales involving alpha heroes to die for, and heroines who give as good as they get. From contemporary to paranormal, BDSM to F/F, and Ménage, haunting love stories are guaranteed.
Stalking Links
Website Blog Twitter  Facebook Pinterest  Evernight Publishing
Amazon All Romance E-Books BookStrand Barnes&Noble