Please welcome Gale to my blog today, with her new release from Evernight! 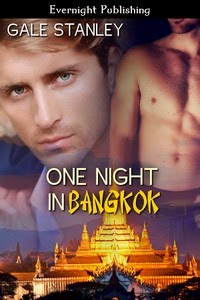 One Night in Bangkok by Gale Stanley


The temperature in Thailand is a humid ninety degrees but things are about to get a lot hotter. David Elliot is in Bangkok on business, but when he meets Kai, the younger man turns his world upside down. It was never meant to be anything more than a pleasant diversion but David can't walk away when it’s over.


The door closed behind them, and suddenly David felt a little shy. He stared at Kai for an awkward moment, wanting to touch and be touched, but not quite believing they were finally alone. Or maybe he was just used to Bernie taking the lead.


Kai waited silently. He really was hotter than any man had a right to be, with those almond-shaped eyes and pouty lips just begging to be kissed. David’s gaze slid south and settled on the full, hard cock straining against the thin material of Kai’s pants. God, he wanted to hold Kai’s prick in his hand, breathe in the scent, taste the drops of precum leaking from the tip….


When he looked up, he saw Kai still watching him. The heat in those brown eyes turned his insides to mush. Desire overcame shyness, and David edged closer. Kai met him halfway and David let out a moan as he captured Kai’s mouth, teasing him with his tongue. Two arms snaked around David’s waist, and their swollen cocks rubbed as they kissed. Hot spikes of sensation flared at David’s groin, and he pulled Kai tighter against his body.


When they broke for a breath, Kai was flushed and panting. Without a word, he slipped from David’s grasp and went to his knees. His slim fingers gripped the waistband of David’s slacks and tugged until they puddled at David’s feet. Eyes so wide and dark they appeared black looked up at him. Then Kai pressed his mouth to the silky fabric covering David’s erection.


When Kai sucked on the tip of David’s cock, David swore he could feel the wet heat through his boxers. His thoughts scattered and he swallowed hard in anticipation. “Kai, please.” He tightened his grip on Kai’s hair and pulled gently.


Kai stood, and they undressed each other like they had that day at the temple. David smoothed a palm over Kai’s chest, muscles tensed and quivered under his touch. The goal had been to get inside this man who tempted him beyond reason, but now he didn’t know if he’d last that long.


Gale Stanley is a hopeless romantic, who grew up in Philadelphia, Pennsylvania, with her nose buried in a book of fairy tales. If a story ended badly, she created her own happily ever after. Now, she writes romance, in all its many splendored facets, because she believes the world needs more love and happy endings.