Today I'd like to welcome Molly Ann Wishlade to my blog. She has written a super sexy "biker" romance. I mean, who doesn't love a tattooed bad boy?? And wait until you get a load of her delicious book cover... well, I won't tease you, here it is: 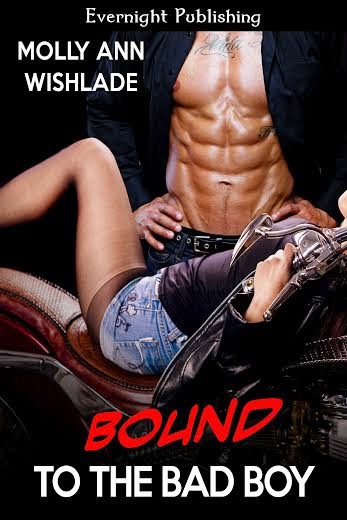 Thanks so much for agreeing to host me with my latest release Bound to the Bad Boy. The idea for this story came from pondering the question: What is it that makes bad boys irresistible? Is it the raw masculine energy, the unpredictable nature, or the desire we feel to tame the wildest man around when it seems that no one else can?
There are many appealing things about bad boys. They have alpha qualities that suggest strength and leadership and there’s nothing sexier than a man who doesn’t give a damn about what others think. He knows his own mind and he goes his own way. The bad boy also doesn’t spend hours worrying about his appearance, yet he is incredibly, effortlessly attractive and alluring. A bad boy doesn’t have to be classically good looking but he must be the epitome of raw masculinity. He is intense, passionate and deep. You know that he will be loyal if he loves you and that he will treasure you above all others, including himself.
In Bound to the Bad Boy, Matt King, the bad boy of the story, is a handsome tattooed biker. He is passionate, loyal and devoted. Matt has a less than flawless background, which you can find out about if you read the story, but he also has some hot and interesting erotic preferences and a fierce passion for his sub, Megan, that has never died.
Let me know what you think and tell me what it is that you love about bad boys.
Molly xxx

EXCERPT 1 (PG)
The doors swung wide open and she held her breath. She tried to look away but her gaze was dragged back to the entrance. Like an addict, she craved her fix and this one had been a long time coming. Cold turkey didn’t suit everyone but for her, it had been the only way to break free.
The scent of leather, oil and raw masculinity filled the gymnasium, a precursor to the arrival of some of the members of the Night Warriors Motorcycle Club. Megan was overwhelmed by an urge to flee. To escape the confines of the gymnasium and to race back to her safe new life. The walls seemed to close in on her as she watched the recent arrivals. The room was suddenly crammed with her old fears, and the ghosts of her adolescent years danced around her, taunting her with her teenage insecurities. She was young, small and helpless.
A victim. Run, damn you. Run.
But she was made of stone and, try as she might, she could not move a muscle.
The Night Warriors strode into the gym as confidently as they had done a lifetime ago. Danger and desire in leathers. They moved with a heavy elegance, large powerful men sure of themselves and their buddies. Their jackets creaked as they walked and their heavy boots pounded relentlessly upon the aging wooden boards. Like a drumroll at an execution, Megan heard them beat out her fate.
She bit her lip. She waited. And waited. Consumed with impatience that drowned out her fears. Where is he?
But there was no sign.
Where was Matt? Wasn’t he coming? What if she had come all this way for nothing?
So you’re admitting it now, huh? You came back for him.
She gave an involuntary little nod. It was true. It would be such a waste of time, of hope, of excitement…if Matt did not turn up. Her heart sank to her stiletto heels and she downed the full cup of punch, wincing as its sweetness filled her mouth and clung to her throat. Then she stared into the empty cup, convinced that her heart was just as void and hollow.
So what now? Just as well, head back to the hotel. All alone, and frustrated as hell.
She was consumed in a black cloud of disappointment and suddenly all she wanted to do was curl up into a ball and cry. To pour her grief out onto her starched hotel pillow until her throat ached and her eyes were swollen.
A few whoops and hollers made her look up.
There he was…striding into the gym, about to be surrounded by old school mates. Or those who would claim to have been his friends. They gathered around him, drawn to his rugged alpha masculinity and self-confidence, as if they believed it would rub off on them.
Clad in black from head to toe. Matt. Black leather jacket, black t-shirt stretched over his bulging chest, black Levi jeans and bulky black boots. He was older but still gorgeous.
So gorgeous.
Her heart picked up its pace and her body flooded with heat. Goosebumps rose on her arms and she shivered with remembered delight. Although the gymnasium stretched out between them, she could feel the boom of his laughter as it shook his broad shoulders and tightened the sinews of his throat. She was transported back to all the times when she had rested her head upon him just to feel the sheer joy of sharing his mirth. She trembled as her love for him threatened to rock her world into chaos once more.
Matt’s hair, combed back from his forehead, exposed his flawless brow. It reached his collar and curled softly around the base of his earlobes. It was shorter than it had been the last time she had seen him, but it suited him. Megan used to love to run her fingers through his ebony curls, to wrap them around her fingers like promise rings. As she watched him, his face lit up with a grin. It was the face of a man now, from his wide throat with its prominent Adam’s apple, to his chiseled jaw and thick, black eyebrows. And his eyes were as dark and dangerous as she remembered, windows to his intense and passionate soul.
He moved his gaze over the crowd and panic broke the spell that had held Megan frozen. She turned away quickly and placed her cup on the table. Her whole body trembled and a hot flush spread from her ruby red toenails to the roots of her auburn hair. How could he have such an effect on her after all this time? She felt like a teenager again. Confused. Aroused. Exhilarated. Terrified.
She had to get out. Make a quick escape. She couldn’t go on pretending she could see him and not be affected by him anymore.
She had been consumed by her love for Matt King once.
She couldn’t let it happen all over again.

EXCERPT (18+)
Megan took a step forwards. She wanted to start the tour. To get moving. To stop the fervent racing of her brain before it made her dizzy. Before she changed her mind and fled.
Matt didn’t move.
She went to take another step forwards but she paused. What was he waiting for? Had she done something wrong, other than deciding to come here with him?
“Matt?”
“You have forgotten.”
She tensed. The tiny hairs on her arms stood on end. Did he want her to kneel? Should she have kept to ‘Master’ instead of using his name? How would this work between them now after so long? Did they just slip back into their old ways?
Surely he’ll tell me what to do, just like always. Whenever I’ve been in doubt, he has helped me, led me, and even calmed me.
“Megan,” he whispered as he moved closer. “Do you need me to remind you?”
She gazed into his eyes but found no answer there. Only the darkness of desire, and the danger of passion. A passion which could be roused like a hungry panther with claws just as sharp and a body just as beautiful, just as powerful. Yes, Matt was dangerous. Addictively so.
She nodded, afraid to speak.
“Take off your dress.”
“What?” her voice squeaked.
“You come into my home, then you play by my rules.”
She looked down. The fire in his eyes was too fierce, too intense. She stared at his broad shoulders instead, at how they morphed into a full muscular chest that bulged beneath his fitted black t-shirt. His arms were heavily tattooed with colorful sleeves that told the story of his life so far. Images of things he’d done, people he’d known, and places he’d travelled.
My name.
She jumped as she spotted it.
Just above his left wrist, written within the body of a snake that was wrapped around a bleeding heart. Had he done that after she’d broken up with him?
Her stomach clenched. Had she hurt him that much that he’d felt the need to ink her betrayal upon his flesh like a brand to remind him?
He lifted his arm.
“Is that because . . .” She couldn’t finish her question.
“Yeah . . . because you left. Because it hurt. Because I never forgot.”
“Oh.” Her eyes stung suddenly with hot tears. She had tried not to think about his feelings when she told him she needed out. He was tough. A man, a biker, a Dom. How could she have possibly hurt him?
He looked away for a moment, a muscle in his jaw twitching as if he was trying to regain his composure. Deciding how to deal with her. She held her breath. Would this be it? The end? Would he remember how mad he was that she had left him and leave her to a night in the lonely hotel bed with just her bullet vibrator for company? And after being this close to him again, she had a feeling that the tiny battery operated device would be unable to even tickle the need that now welled up inside her, shaking her to her very core.
He blinked then turned to her again. His face was calm, his features relaxed, as if he had pulled down a roller blind to hide his emotions, doubts and fears.
“So…Megan…” He ran a finger down her arm and she shivered. His touch was feather light yet it stirred her immediately. Her panties dampened with her moist heat. “Are you staying?”
She nodded. “Please, Master.”
“Then . . .” He gestured at her dress.
She lowered her eyes. Her crimson bodice stuck out in two places where her nipples protruded. A bead of perspiration trickled down between her heavy breasts. She absently brushed at the sticky residue of the reunion nametag but it clung to the shiny fabric like her lust now clung to her.
She was hot for him. She wanted to stay. Just for tonight. At least for tonight. So she had to play by his rules. Just like always.
The thought tingled through her entire body, curling in her pussy like a hot tongue and she began to unzip her dress, trembling with nerves and desire.